Axis formation is an important stage in embryonic development. This is when it is determined which side will develop into the head and which into the abdomen. If something goes wrong during axis formation the result is embryos with two abdomens or two heads. Researchers from Friedrich-Alexander-Universität Erlangen-Nürnberg and Georg-August-Universität Göttingen have now discovered that there are greater similarities between this process in insects and in vertebrates than has previously been assumed. Their findings were published in the journal Proceedings of the National Academy of Sciences.

In the Drosophila fly, the mother gives embryos the information they need for axis formation. She attaches signal molecules to opposite poles of the egg cell, where the head and the abdomen are to be formed. All the embryo then has to do is process this information. In vertebrates such as humans, however, the embryo has to form the axis itself by creating a Wnt signalling pathway at what is to later develop into the abdomen. Until now, these different methods had been seen as a significant difference between vertebrates and insects. 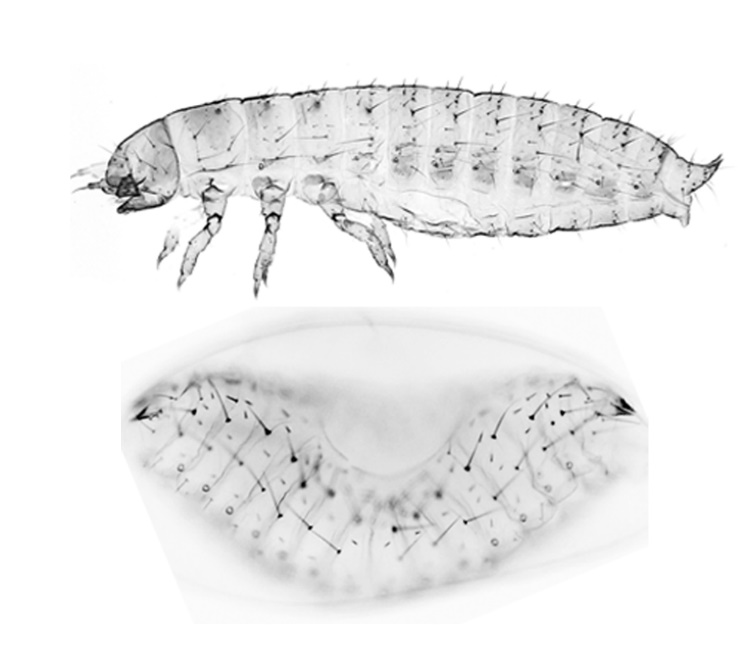 If the germ cell-less gene is turned off, two mirror-image abdomens are formed (below) instead of a head and an abdomen (above). (Image: Uni Göttingen/Georg Bucher)

Scientists from Göttingen and Erlangen have systematically screened the genome of a second insect, the red flour beetle Tribolium castaneum. The beetle has a total of 16,000 genes. So far, the researchers have turned off 8000 genes one at a time and observed the development of the defective embryos. One of the genes is called ‘germ cell-less’. As soon as this gene was turned off in the mother, the embryo formed two mirror-image abdomens. ‘We had not expected this result at all, as in fly embryos this gene is involved in developing germ cells in the abdomen – an entirely different process,’ explains Dr Salim Ansari from the Department of Evolutionary Developmental Genetics at the Faculty for Biology and Psychology in Göttingen, the lead author of the study.

In the flour beetle, the mother requires germ cell-less to pump a signal molecule into the egg cell. This molecule then indirectly ensures that a Wnt signalling pathway is formed at the posterior of the embryo – similarly to vertebrates. Like with vertebrates, the maternal signals alone are not sufficient for axis formation, the beetle embryo must form the signalling pathways itself. ‘It goes without saying that the development of insects varies greatly from the development of vertebrates, but the development of the fly appears to not be particularly typical for insects,’ says project coordinator Prof. Dr. Gregor Bucher from the Department of Evolutionary Developmental Genetics in Göttingen. ‘It is amazing how quickly evolution takes existing genes and uses them in an entirely different context – similarly to the way you can use the same tools at different building sites,’ adds Prof.Dr. Martin Klingler, professor for Zoology (Developmental Biology) at FAU.

The study is part of the ‘iBeetle’ project, aimed at screening the genome of red flour beetles. The red flour beetle is the second insect to have been fully analysed, after the Drosophila fly. As well as fundamental insights into the development of the beetle, the scientists have also discovered previously unknown genes which could play a role in pest control or in producing biodiesel. The findings from the iBeetle project can be accessed without restriction from anywhere in the world, allowing others to work with the data. Further information is available online at http://ibeetle.uni-goettingen.de.