Just under five years ago, an international team led by Friedrich-Alexander-Universität Erlangen-Nürnberg (FAU) undertook to significantly increase the yield of the tropical cassava plant. The researchers in the ‘Cassava Source-Sink’ project are supported by the Bill & Melinda Gates Foundation, which has set itself the goal of fighting famine, disease and poverty in developing countries. Recently, the Foundation has decided to provide a further 15 million dollars in funding for the researchers’ work over the next five years.

Nowadays, you can even find the starchy root of the cassava plant in German supermarkets. Whilst it caters to a niche market here in Germany, it is a staple food for nearly one billion people worldwide. Especially in the tropical regions of Asia, South America and Africa in particular, the underground storage organ of the cassava plant forms the basis for a great many meals, with its high starch content making the root an excellent source of carbohydrate. Globally, cassava is the fourth most important source of carbohydrate after maize, rice and wheat, and is essential for ensuring food security in many poor countries throughout the world. 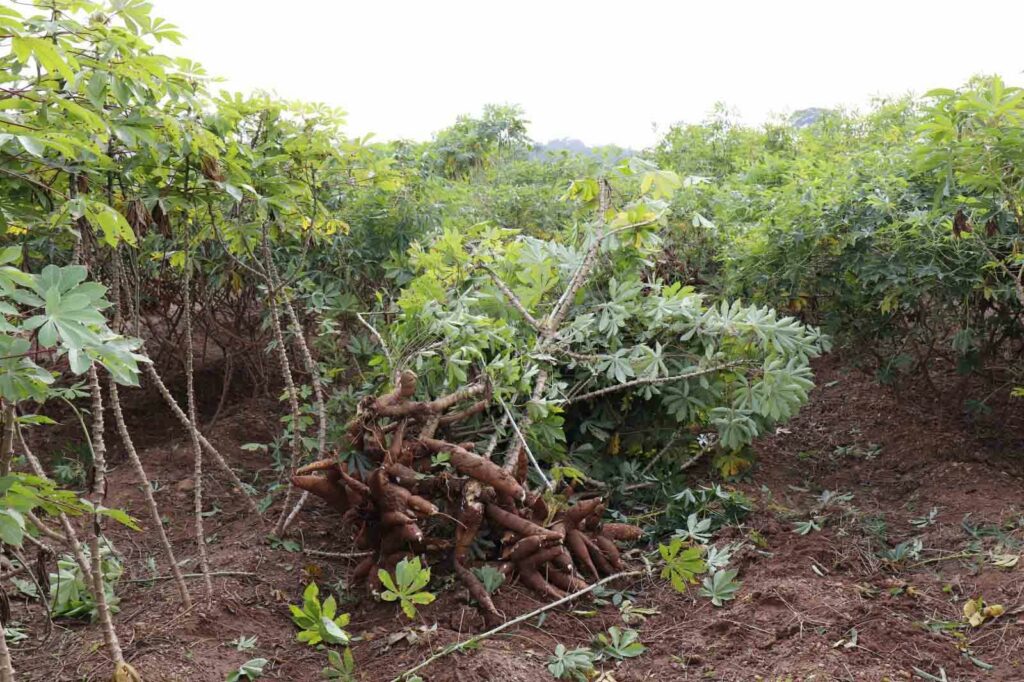 Whilst cassava plants are even being grown at FAU, the roots the plants form under artificial conditions are no comparison to those grown by plants in their natural habitat in tropical countries. (Image: FZJ/Anna van Doorn)

‘Whilst the potential yield of plants such as maize, wheat or rice is very high thanks to thousands of years of intensive plant cultivation and advanced agricultural expertise, these plants are also very demanding in terms of the nutrients and water they require. The cassava plant, however, is very robust, easy to care for and still provides a fair yield. Considerably increasing the yield of cassava could therefore make a significant contribution to fighting hunger throughout the world,’ explains Prof. Dr. Uwe Sonnewald from the Chair of Biochemistry at FAU. Five years ago, an international team of researchers led by Prof. Dr. Uwe Sonnewald and consisting of a total of ten research groups from Europe, Africa and North America received a total of 10 million dollars in funding from the Bill & Melinda Gates Foundation. Recently, the Foundation has decided to provide a further 15 million dollars in funding for the researchers’ work over the next five years.

The strategy pursued by the researchers is similar to the approach taken for cultivating modern crops. By modifying the growth patterns of plants, researchers are trying to increase the proportion of the harvestable part of the plant, in the case of cassava the starchy storage root, compared to the rest of the plant. Over the last five years, the team has organised the various research groups in the field, arranged the international infrastructure and logistics and improved their understanding of the structure and metabolism of the cassava plant. As very little research has been conducted into the plant until now, there was and still is a lot of work to be done. The main focus of the team has been on altering the metabolism of the plants and cultivating numerous different varieties of cassava. 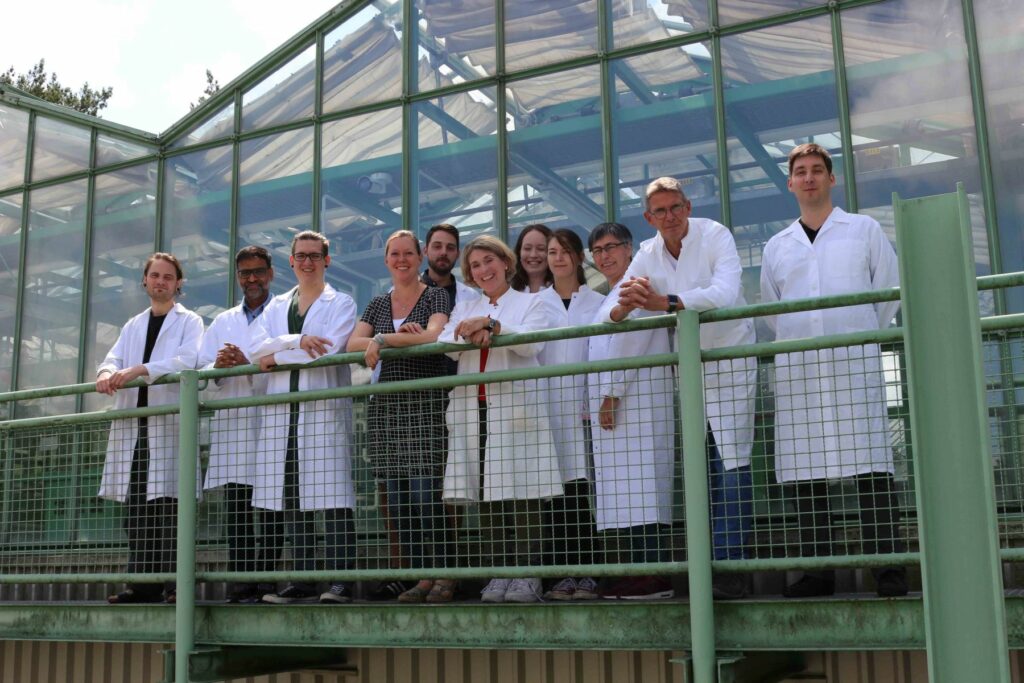 After five years of intensive research, they have now reached the pivotal point of the project: altering the source-sink ratio to increase yield, and then testing which plants are the most promising in extensive field trials. ‘Source’ refers to those parts of the plant which produce more carbohydrate than they need, for example the leaves. ‘Sink’, on the other hand, refers to all those parts which use more carbohydrate such as blossom, fruit or storage roots. In order to reach their objective, the team is focussing on simultaneously modifying processes which improve photosynthesis, the distribution of carbohydrate and the growth of the storage roots in the plants. Changes have to be made simultaneously to the extent to which several genes are expressed, a technique which was made possible thanks to newly developed gene transfer methods.

The first field trials have already started in Africa and Asia. The initial results of a field trial are expected in November, with more to follow in the coming years. ‘After our first year of field trials we certainly expect there to be some plants which already have a higher yield, but further improvements will still have to be made,’ says Prof. Uwe Sonnewald. Once the plants with the best gene combinations have been found, a second team of researchers form Nigeria will introduce these combinations into more African cassava plants and tested to determine how effective they are at boosting yield. According to Prof. Uwe Sonnewald, it may take up to ten years before the plants actually end up with farmers in Africa. 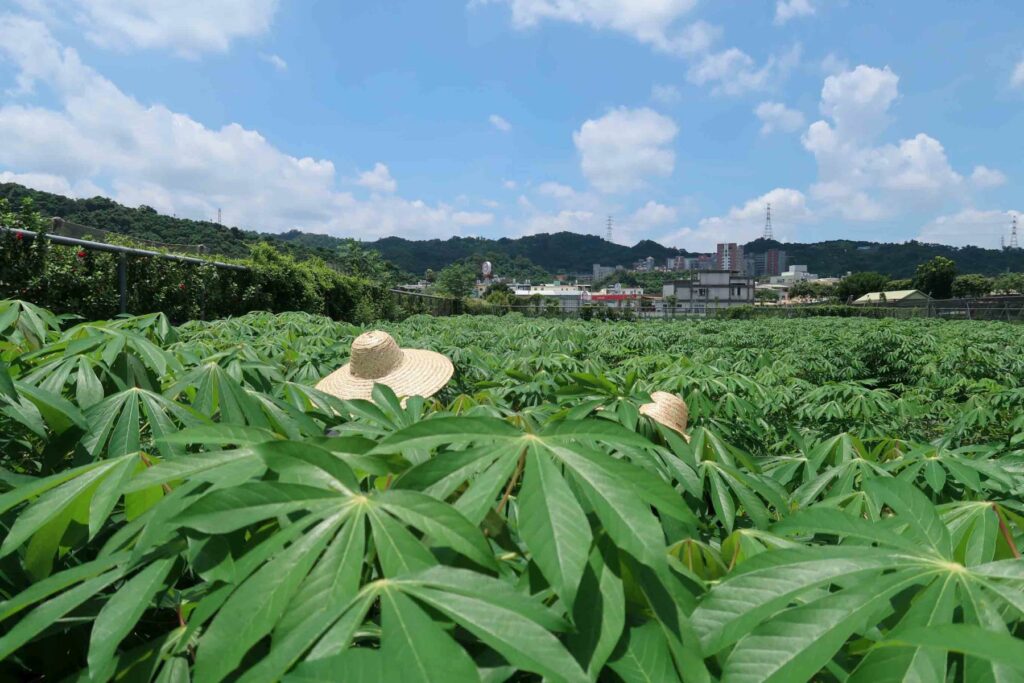 The initial results of the field trials are expected in November. (Image: NCHU/Shu-Heng Chang)

Leading experts from various disciplines – ranging from plant physiology to molecular biochemistry and physiology to biotechnology and cassava cultivation – are working together in the ‘Cassava Source-Sink (CASS)’ project. In addition to FAU, the international partners in the project include ETH Zurich (Switzerland), the Max-Planck Institute of Molecular Plant Physiology, Helmholtz-Zentrum Jülich, Technische Universität Kaiserslautern, Boyce Thompson Institute (USA), Sainsbury Laboratory Cambridge University (UK) as well as the International Institute of Tropical Agriculture and the National Root Crops Research Institute in Nigeria.

Further details are available on the project website www.biochemie.nat.uni-erlangen.de/Cassava