Celebrating 150 years of the periodic table

Celebrating 150 years of the periodic table

The United Nations declared 2019 the International Year of the Periodic Table on the occasion of the 150th anniversary of the periodic table. On 5 December, the UN closing event took place in Tokyo, Japan. During the past few months, FAU has asked our scientists about their “favorite elements” on the jubilee year. 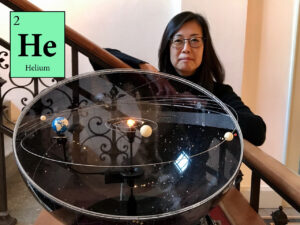 “After hydrogen, helium is the second most common element in the universe and accounts for about 25 percent of the mass of visible matter. The element was first found in the solar spectrum and is therefore called helium – after “hélios”, the classical Greek word for “sun”.

Helium is an inert gas and does not only play a vital role in astronomy, but also in quantum mechanics, for example, because it is the simplest multi-electron atom and allows for calculations of atomic states.

It is also used as a filling gas for balloons and can be a lot of fun, since the voice can become very high after inhaling helium due to the higher speed of sound relative to the air.” 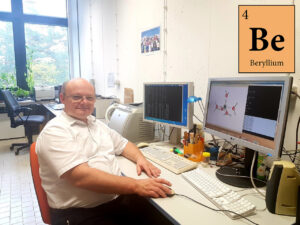 “On the one hand, compounds of beryllium are fascinating because of breath-taking gems such as emeralds or aquamarines; on the other hand, beryllium is reputed to be the most poisonous, non-radioactive element, if rightly so is controversial. Beryllium is “my” element for several reasons. It plays a central role in the development of elements in stars. In the past, people used gems, which contained beryllium, so called beryls, as optical aids (therefore the German word “Brille”). Nowadays, we use beryllium and its compounds in the high-tech sector; for example, the mirrors of the James Webb telescope are made of it.

Only few molecules fit around the smallest metal cation that we know – usually four in a tetrahedral arrangement. Reactions and the related mechanisms at such centres as well as the question how beryllium ions react in molecular cages are at the centre of my research as a theoretically oriented, predominantly inorganic chemist.”

“Without calcium, it does not work! All our senses function thanks to very low flows of calcium. In addition to biochemistry, I am fascinated by the still young organocalcium chemistry. Calcium has many secrets. Can calcium replace platinum? Does it use d-orbitals? The future is full of surprises!”

The FAU research team headed by Prof. Dr. Harder, along with other scientists, gave the element calcium a face through a publication in the interactive periodic table of the Nature publishing house: https://www.nature.com/immersive/d42859-019-00001-7/index.html

“Due to my research, my favorite element is neodymium from the group of rare earths or lanthanides. Neodymium and the other rare earths occur in all rocks of the Earth´s crust and the Earth´s mantle in very low concentrations. The measuring of those elements has substantially contributed to the understanding of the chemical development of the planet Earth and the solar system.

The measuring of those isotopes allows us geoscientists to determine the age of rocks, which are sometimes billions of years old, and to give information on the formation of the solar system and the earth. The gravity of Neodymium is now widespread as the element is an important component of some of the strongest magnets, which are for example used in electric engines.” 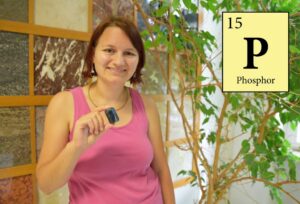 “My favourite element is phosphor (P) – a very exciting element. You wouldn´t want to hold white phosphor in your hands because you could literally burn your fingers.

Conversely, without phosphor we wouldn´t be able to hold anything in our hands – there would be no “construction plan” for us because phosphate is part of our genome. Furthermore, essential components would be missing as our skeleton mostly consists of the calcium phosphate mineral Hydroxylapatite.

Therefore, I am also concerned with calcium phosphate for use as bone substitute. Thus, phosphor can be either vital or extremely dangerous – it depends on the environment.” 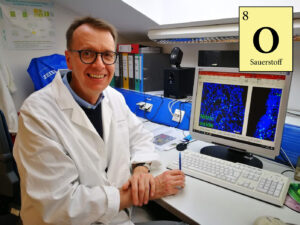 “Oxygen fascinates me since my schooldays: the binding of oxygen during combustion processes, the hydrogen-oxygen reaction, the numerous colourful metal oxides and minerals, the formation of oxygen during the photosynthesis of plants or the use of oxygen for energy production within the respiratory chain of cellular power plants (mitochondria) have sparked my interest in this element.

In my research work as a medical microbiologist and immunologist, I encounter oxygen in other, equally exciting functions: phagocytes use oxygen for the synthesis of molecules such as nitric oxide, hydrogen peroxide or hypochlorite, which are of immense significance for fighting infections and immune regulation.”

“The band Nirvana named a song after it, it helps against depression, against the use of combustion engines and leads to long hardening times of my cement. Lithium is used for therapy in medicine, in the batteries of electronic cars and as an activator in quick cements.

At FAU, I do research on cements and the effect of lithium on their components.

The name “lithium” derives from the Greek word for stone, because its was first won from it. I brought a mineral with me, which contains lithium, sometimes you can buy it as a gemstone: Its name is spodumene. Lithium can be detected with its strong red flame coloration.” 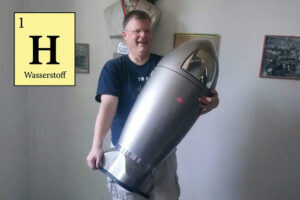 “Hydrogen is not only the beginning of the periodic table, but by far the most common element in the universe: In mass fraction, 75 per cent of the matter in the universe consist of hydrogen.

The stars, which we see in the sky, as well as our sun, produce their energy by using the fusion from hydrogen to helium. Therefore, hydrogen surely is one of the most important elements for us.”

“My favourite element is sulphur (S) – a multifaceted element which has been known for 5.000 years. The ancient Egyptians for example used sulphur for bleaching textiles, as medicine and for disinfection.

The ancient Greeks sulfurized wine and horseradish to extend their durability and this preservation method is still in use today. In the Old Testament, sulphur is mentioned as a weapon of war in connection with the destruction of the cities Sodom and Gomorra.

A treatise from around 1044 describes different forms of black powder, a mixture of potassium nitrate, charcoal and sulphur. Sulphur also occurs near active volcanos. For example, the steam exits on the island of Vulcano emit, among other things, hydrogen sulphide, which condenses at the exit point and forms yellow, beautifully to be regarded sulfur crystals.” 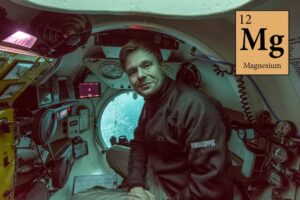 “My favorite element is magnesium (Mg), which can be found in numerous minerals.

Even my main research object, the coralline red algae, incorporate it into their calcite skeleton – namely in dependence of the environmental conditions.

Furthermore, as they develop an annual rhythm such as trees, I can, for example, indicate earlier temperatures or the advancing ocean acidification with the help of the magnesium concentration – exactly to the year and partly more than 100 years back in the past.

To collect the respective sample material from the ocean floor of the Arctic Zone, my work area, is a special pleasure, of course.” 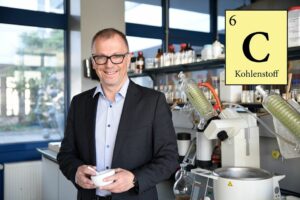 “My favorite element is carbon (C), the chemical chameleon.

Not only because I built my scientific career on this element, but also because it is the most important element on earth.

No life without carbon! Microorganisms, plants and animals have converted as biocatalysts CO2 – the only prototype of carbon on our planet – into organic matter or biomineralized in mussels. This has resulted in oil, coal and limestone mountains, which today save the vast majority of C on earth.

Later, we chemists were able to produce more fascinating C-shapes, like the football-shaped fullerenes, the carbon nanotubes, and the graphene, the thinnest known high-performance material. “