What fat residues can tell us about past eating habits

What fat residues can tell us about past eating habits

Researchers from FAU, the University of Bristol and the University of Nottingham (UK) have developed a new procedure which allows fat residues to be analysed better than ever before in vessels that are thousands of years old. Mass spectrometry imaging can be used to determine the distribution and concentration of lipids, for example from meat, milk or cereals, without having to destroy the ceramics in the process. The findings were published in the journal PNAS.

How did our ancestors in the stone age live? What did they eat? How did they cook and store their supplies? Archaeological finds can give us insights into a time for which no written records exist. In the 1960’s, scientists discovered that lipids, i.e fats, can survive for thousands of years in ceramics which were used to cook (for example by boiling, frying or roasting) or store supplies. For example, an analysis of fatty acids demonstrated that milk was processed into cheese more than 9000 years ago in Northwest Anatolia. Similarly, beeswax residues can indicate when people first domesticated honey bees.

Lipids are preserved in pores

In most instances, we are not talking about significant clumps of tallow or wax stuck in ridges or corners,’ says Prof. Dr. Simon Hamman, assistant professor of Food Safety and Quality at FAU. ‘The fats are absorbed into the porous matrix of clay pots used repeatedly for cooking or for storing supplies over a longer period of time and have survived there for anything up to several millennia, protected from being washed out by groundwater or broken down by microbes.’ Up to 100 microgrammes, sometimes even several milligrams, of lipid residues can be detected today in one gram of ceramics. Gas chromatography and mass spectrometry are used to decode the biomolecular components, resulting in a chemical fingerprint which allows the researchers to identify which foods the original vessel was used for. The major disadvantage of this method is that the ceramic samples have to be pulverised entirely, which not only destroys them irrevocably, but also does not allow any information to be gained about the distribution of the lipids in the vessel. 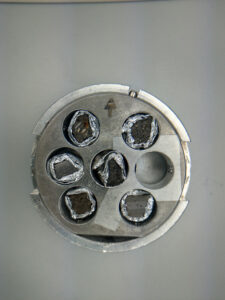 Samples in a specimen holder for the electron microscope. (Image: FAU/Simon Hammann)

Simon Hamman completed his doctoral degree in the analysis of lipids in food, before researching lipids specific to cereals in archaeological samples and the breakdown of fats under various environmental conditions as a postdoc at the University of Bristol. ‘However, none of these experiments were able to explain how lipids became integrated into the inorganic structure of ceramics and how they were distributed there,’ he explains. In order to solve this problem, he turned to technology predominantly used in biomedicine and materials science: secondary mass spectrometry (SIMS). This imaging method involves a high-energy ion beam extracting elements from the surface without destroying the sample. A mass spectrometer integrated into the device determines the chemical composition of the desorbed substances. ‘Together with colleagues at the University of Nottingham, which owns one of the most modern SIMS devices, I was able to obtain excellent data from my archaeological samples,’ Hamman explains. ‘Instead of just a few isolated signals in the smallest pores, in some samples we detected lipid zones of up to 400 micrometres in size.’

The distribution of the lipids gives an indication of how food was prepared.

SIMS data show the lipids (green) in the inorganic matrix (red) – on the left for an area of 500 x 500 µm with a resolution of approximately 2 µm and on the right for the smaller area of approximately 0.5 µm. (Image: FAU/Simon Hammann)

Using SIMS technology, which can deliver brilliant spatial resolution of significantly less than one micrometre, Hammann was the first to successfully show lipids in coherent structures. This is a highly significant step, as a complex picture of the distribution of lipids in the ceramic could in future give an indication of how foods were prepared. ‘If we find a particularly high concentration of lipids in the upper area of a clay pot, we can conclude that it was mainly used for boiling,’ explains Simon Hammann. ‘If the lipid residues are concentrated on the bottom of the vessel, this suggests that it was mainly used for frying or roasting.’ Until now, several shards of a vessel have been required in order to determine its purpose. Mass spectrometry imaging now means that only one shard is required.

During his research, Simon Hammann discovered another important aspect of lipid conservation in archaeological ceramics. Many of the larger inclusions, some of which were even visible to the naked eye, seemed to be connected to calcium salts. ‘Calcium carbonate, for example in the form of shells or limestone, was often used when firing the vessels, and later reacted with the fatty acids to form fatty calcium salts,’ explains Hammann. ‘These salts are not very soluble at all, making them a very good preservative for the lipids.’ The traditional method of extraction using chloroform and methanol is not suitable for dissolving these salts; the only way to gain access to the trapped lipids is to use acidic extracting agents. Hammann: ‘Our research is still in the early stages, but lipids preserved in calcium salts are a valuable source for analysing archaeological finds in more detail in future.’